From Fainting to Flying: A Short Story 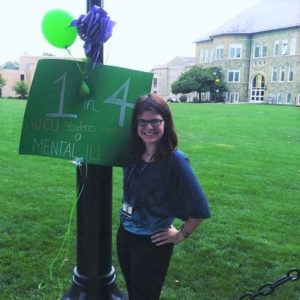 Gusts of wind chill the University of West Chester’s campus on a winter morning, but the dorms provide a cozy spot away from the rawness of the weather.

Inside one of these dorms sits a smiling Allie Short, first year student at WCU, former student of The Lincoln Center’s Leadership Academy (previously called the Trans Ed Academy). Short has dealt with mental illness almost her entire life, but you wouldn’t know her struggles just by looking at her.

“Allie’s bubbly personality and positivity will always stand out when I think of her,” says Rebecca Walker, Lead Counselor at the Leadership Academy. “Allie could have had a rough day, but would always make sure to check in before she left to say good-bye, and did so with a smile.  She wants the best for those around her.”

But during her first year at the Academy, Short routinely slept on a couch in the school in order to avoid going to class. Short’s therapists originally thought she was struggling with borderline personality disorder, which would have explained her school avoidant tendencies.

“Most people, once they got [to school], it’s like okay now I’m here, let’s do my work, whereas I was like, okay, now I’m here, now I’m gonna give you a million reasons why I can’t be here,” said Short.

But she went to even greater lengths to avoid school than just sleeping on a couch, including pretending to faint.

Short’s case manager referred to this “ailment” as “fainting goat syndrome,” because Short would keel over like some goats who have a genetic mutation that causes them to faint when they are frightened.

Short tested the boundaries, seeing how far she could push the “fainting goat” act, and began pretending to faint at the academy in order to avoid class. The academy legally had to call an ambulance, even though they knew Short didn’t actually suffer from fainting spells. One time, after Short had been toted off to the hospital in an ambulance, her mom picked her up at the hospital once they had cleared her to leave and drove her right back to school. The fainting goat phase lasted about 9 or 10 months.

Another rouse to get out of school centered around an arranged fight between Short and a friend, who were both school avoidant. Their end game was to get suspended from school so they had a reason not to attend. They situated themselves in a place not entirely visible to others, and then Short told her friend to push her into the wall to make just enough noise to alert someone. They then started screaming at each other to make it seem like they’d had an altercation.

Through all this effort to avoid school, Short also evaded what was at the crux of her mental illness. But after time and therapy both at the Leadership Academy and with an outside therapist, Short’s diagnosis changed.

“When I started [going to therapy] I was originally diagnosed with borderline personality disorder,” Short said. “And then they realized that the PTSD [being] suppressed is what was causing a lot of borderline symptoms to exhibit.”

During her second year at the academy, with a revised diagnosis, Short began working through her PTSD and putting effort into classes. She attended the Technical College High School in West Chester part-time for their animal science program, became a certified animal care assistant and Purina Weight Coach, and earned competencies in infectious diseases. These courses helped her get positions at Aardvark animal hospital where she sat in on surgeries, socialized puppies and kittens, cleaned litter boxes and cages, and re-filled water bottles, and Springton Manor Farm, where she witnessed baby goats being born, fed and watered horses, cleaned horses’ stalls, brushed the horses, and even washed a horse once. 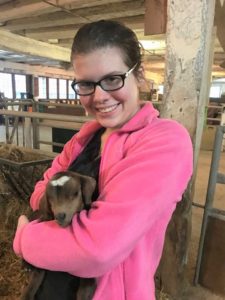 Though Short has a great love for animals, she’s allergic to almost everything, including cats, horses, and hay, which is part of the reason she is now pursuing a degree in social work. And after her first semester at West Chester University, her high GPA has earned her a spot on the dean’s list. She was also selected to be a part of the social justice theater group called the Just Act team, a group that puts on shows in which they interact with the audience while talking about social justice problems such as homophobia, sexism, classism, racism and discrimination.

Short has adjusted extremely well to campus life, but sometimes she just wants a place where she can relax all by herself.

“Sometimes the social stuff gets to be a bit much,” said Short. “Sometimes you just want a quiet place and there isn’t always one. There are people everywhere.”

But overall, Short has been excelling in the classroom and thriving on campus.

“I’m doing once a week therapy and functioning with that,” said Short. “I’m off all my medications, which no one ever thought would be a thing. I totally didn’t go about that the right away because I just kind of took myself off of them.”

Short may have gone off her medication somewhat suddenly, but she was left with few choices when she aged out of adolescent services at age 21. She had trouble finding a psychiatrist who would take her insurance, and the psychiatrist she did find without a year-long waiting list had a $250 co-pay. So she took advantage of an inconvenient situation and went off medication completely. Her therapist put her on call 24 hours a day when she went off medication until it was tapered out of her system, and she now monitors her mental health symptoms by using essential oils and by taking vitamins and supplements such as magnesium.

“It’s impressive how Allie has learned to manage her mental health through connecting with others and engaging in her own treatment,” said Kerri Blakey, Chief Program Officer at The Lincoln Center for Family and Youth, and a person who knows Allie well. “She has found outlets in theater, art, jewelry making, and mentoring others, along with vitamins and supplements. It would be no failure if Allie ever felt she needed to utilize traditional medication at any point, but it’s through her own doing that she has a more positive sense of self which has allowed her to manage without it.”

Along with theater and art, Short copes by listening to music, writing, and playing with fidget cubes—cubes with different types of buttons and textures on each side. She enjoys managing her mental health with a more natural approach.

“Through treatment I don’t even fit the criteria for [borderline personality disorder] anymore,” said Short. “I haven’t been on medications since august. I came off everything and I manage it through outpatient therapy once a week. I can safely say I’m in a stable place and I know I am getting to a place where I will be able to succeed in social work.”

She specifically wants to be a social worker within the foster care system, though she was never in it as a child.

“Although I want to go into foster care and I can’t relate to that, no one can really relate to anyone because everyone has their own experiences,” Short said. “But at the same time, we all have the same core emotions, so while we can’t understand what another person’s feeling, you have pain, I have pain. You have sadness, I have sadness. I don’t know what yours looks like but I know what mine looks like and that can suck pretty bad, so I can imagine that yours sucks too type of thing. You don’t need to understand the situation. You need to just understand the emotions. And there are too many people in the field not willing to understand the emotion. There are way too many people who get lost in the system and fall through the cracks and don’t have anyone. By being a social worker in the foster care system you can be that contact point for a kid. Someone who has nothing stable in their life, you can be that stability.”

Short has achieved quite a feat; with help, she has pulled herself out of the darkness of trauma. She still copes with mental illness, but does so in a healthy way that keeps her happy, motivated, and stable.

“[I’m in] a totally different place…different person, different skillsets, different mindsets,” said Short. “Life is going good. Things are going right. I just interviewed to be an RA for next year, so fingers crossed.”

Best of luck, Allie. (Not that you need it).

Marisa Wherry is the Development Coordinator at The Lincoln Center for Family and Youth. She graduated from Ithaca College in 2017 with degrees in writing and culture & communication. Previously, Marisa was the Co-Editor-in-Chief of States of Mind, a mental health literary magazine based in Ithaca, New York.